in the Minecraft Gallery
For my Science Gallery Rapid Residency I wanted to expand the Minecraft Gallery project by granting gallery visitors more ownership of the space allowing them to make their own mark on the space and generate art work to be displayed in the gallery. Taking inspiration from works like "The Recovery of Discovery" by Cyprien Gaillard, a beer crate pyramid that invited the installation visitors to do what they wished with, the works destruction is ultimately the works purpose.
Generative art has long been a running theme in my practice and this was a perfect opportunity to implement it. The Science Gallery allowed me the time and space to develop this project freely without the life or death pressure to complete a project that comes along with other forms of public validation. This relaxed atmosphere let me have fun with it and essentially figure out my direction through play, an aspect of art and design I believe is greatly overlooked.
The project became an open sandbox designated inside a fixed boundary that the gallery visitors would be able to visit and place or destroy anything they wished in order to create an image shown in the gallery as if looking at the designated area from a birds eye view.
​The space was barren, empty and enormous and marking marks for visitors was proving difficult as you can see in the picture below of the disappointed visitor who went to view their last hours work on the collaborative canvas.
This coupled with most visitors natural penchant for destruction prompted the major change that dramatically shaped the project outcome. Leaning into these natural human tendencies I followed more in line with Cyrien Gaillards work (mentioned previously) and gave them something to destroy, as apposed to forcing creation, I facilated creation through destruction. I gave them the Mona Lisa. 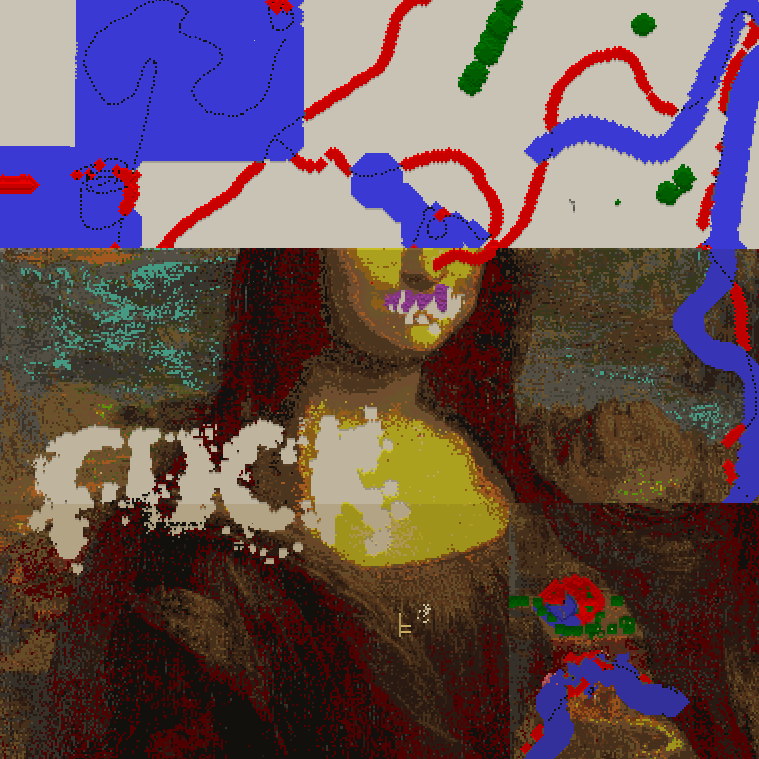 "Minecraft Gallery Collaborative Canvas" by The Minecraft Gallery Visitors 2020
There was a greater ability to make marks through destruction by the games natural mechanics, hijacking these mechanics the visitors made greater impact by using water and lava that cover large areas instantly and when they met formed a whole other type block called "obsidian". Others planted and grew lots of trees to create plooms of green and some used TNT to cause unpredictable destruction excavating large portions of the Mona Lisa's face and shoulder region. Although this image may resemble the inside of a nightclub toilet stall I believe the beauty of collaboration outshines an perfect picture, this decentralised artwork was created by people all around the world who don't know eachother, I dont even know them, and they all made something together. They will die some day all not knowing or realising who they created art with, just like how  Leonardo Di Vinci didn't know 517 years ago as he was finishing his last stroke on the Mona Lisa, that in the year 2020 he would participate (by force) in the generation of an artwork for a virtual gallery inside of a video game.
Funded in part by the Provost's Academic Development Fund from Trinity College Dublin.